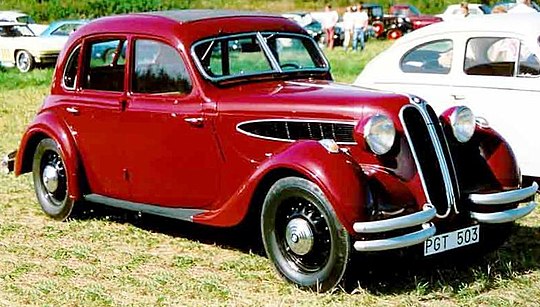 Designed by Fritz Fiedler, the 326 featured a box-section frame[5] that could readily be adapted for derivative models.[citation needed] Also innovative were the torsion bar rear suspension, inspired by the dead axle suspension of the Citroën Traction Avant, and the hydraulic braking system, the first to be used on a BMW car. Styled by Peter Schimanowski, the 326 was offered as a four-door sedan and as a two- or four-door cabriolet. The 326 sedan was the first BMW available with four doors.[5] The BMW 320, BMW 321, BMW 327, and BMW 335 were based on the 326.[6] The streamlined form of the body contrasted with previous relatively upright BMWs: drag was presumably reduced further by including a fixed cover over the spare wheel at the back.[citation needed]
🗃 Category None
💺 Seats 4
📈 Quotation $199,938
🧮 Produced 15,952