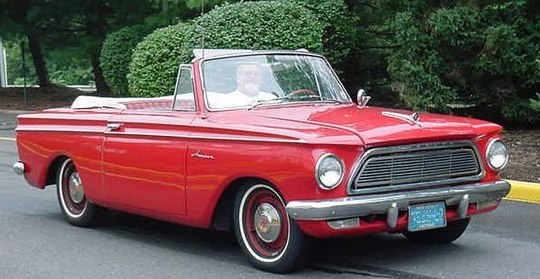 The Rambler American is a compact car that was manufactured by the American Motors Corporation (AMC) between 1958 and 1969. The American was the second incarnation of AMC's forerunner Nash Motors second-generation Rambler compact that was sold under the Nash and Hudson Motors marques from 1954 and 1955. The American can be classified in three distinct model year generations: 1958 to 1960, 1961 to 1963, and 1964 to 1969. During the entire length of its production, the car was sold under the Rambler brand name, and was the last Rambler named automobile marketed in the Canadian and United States markets.
🗃 Category Compact
💺 Seats 4
📈 Quotation $11,564
🧮 Produced