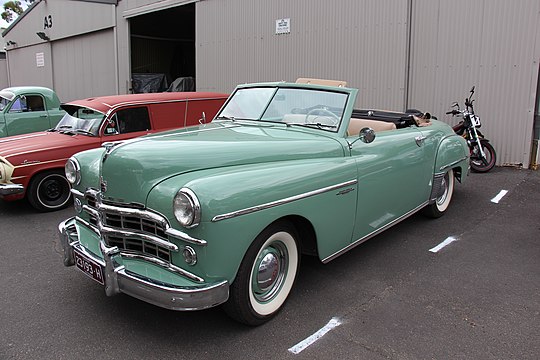 The "true" 1949 Dodges were introduced in February 1949, after a long production run of the 1948s. The Wayfarer (known as the D-29 series), aside from its shorter wheelbase, shared the boxy corporate design of the new 1949 Chrysler products. While much improved over the earlier Dodges, the Wayfarer still had to do without features such as a crankshaft dampener, the new Micronic oil filter, a splash-proof distributor, and rivetless brake linings. The windshield wipers were vacuum-powered rather than electric, and only the right-hand door received an exterior lock - the roadster receiving none. The Wayfarer arrived with three different bodystyles: a two-door sedan, a two-door business coupe, and the two-door roadster (only entering production in May).[7] The business coupe shared some bodywork with Plymouth's business coupe version, but the other Wayfarer's had unique pressings.[2]
🗃 Category None
💺 Seats
📈 Quotation $16,200
🧮 Produced