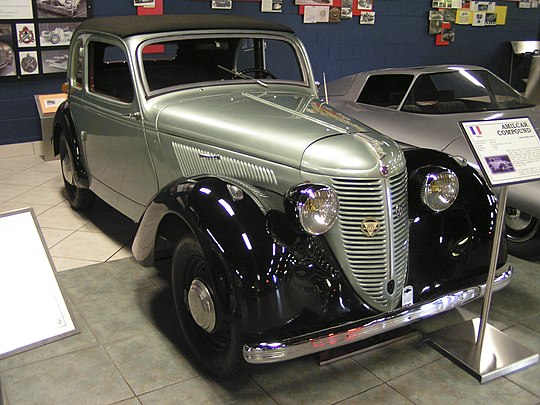 The first Compound, the Compound B38, was presented at the 1937 Paris Motor Show, but production was delayed by difficulties involving the car’s light metal panels, which still represented a very new technology. Series production only got underway a year later.[1] Nevertheless, 35 of the cars were produced during the final quarter of 1938, and through 1939 production built up progressively, with 576 Compounds produced that year.[1] A further 64 were produced during the early months of 1940: however France, along with Britain, had declared war on Germany in September 1939. War affected the French auto-industry during the ensuing months, as first the Paris Motor Show, scheduled for October 1939, was cancelled and then, in June 1940 the German Army invaded and occupied the northern half of the country.[1]
🗃 Category None
💺 Seats 5
📈 Quotation $14,375
🧮 Produced 900